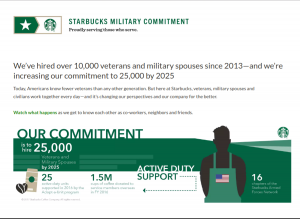 Today , I read about a commitment by Starbucks to hire military veterans  and their family members publicly stated as a branding exercise !. What a noble way of recognizing the contributions made by the Armed Forces of USA ! . I am also aware that the US Government and the Industry gives utmost priority to employ Military Veterans in Civilian jobs after their engagement with the Forces. In the UK , there is a Govt sponsored Career Transition Partnership [CTP ] to connect military veterans with the Civil Industry.

Hiring veterans from the military is a good business , according to a research through in – depth interviews with individuals representing 69 companies across the US , by Margaret C Harrell and Nancy Berglass from the Center for a New American Security . Advantages as per this report for hiring military veterans are –

Back home in India , in spite of  a full fledged Resettlement Directorate functioning with the Ministry of Defense , and various appeals made from time to time , only a very small percentage of the Armed Forces  veterans who retire at a comparatively younger age get a second career in the civil .  Of late , there are many isolated initiatives by many agencies to conduct training programs and orientation programs but these are yet to create an impact because of the lack of willingness of the Corporate World to come out with a process to enable this. There is also no stated policy or commitment from the Government to facilitate this transition.

The general public and the Corporate World know only about the primary role of the Armed Forces – defending the nation against any external aggression. Therefore , the only skills that they generally attribute to the military officers and soldiers is in the domain of security jobs and at times general administration.  In today’s  hi -tech and most complex military environment , the men [ and now women ] in arms , possess  very high degree of expertise in many fields of technology and engineering which can be gainfully utilized by the corporate organizations. In addition, the excellent managerial and people skills of the officers  who have been tested in high pressure situations with an ability to taking responsibility for their actions and getting things done first time , can be exploited by the society at large . They are quick to learn , picking up new skills and can adapt to new circumstances with ease.

I had read a paper on this titled ‘ Share our Brain Ware ‘ in the first Army – Industry partnership seminar organized by the CII [ Confederation of Indian Industry ] at New Delhi in 1995 while I was serving as a Dean of the Management Training Wing at the Military College of Electronics and Mechanical Engineering at Secunderabad . It was well received by the participants and some follow up action was initiated to get the details of skills and expertise from the Army sources for dissemination to CII member organizations. We also had successful Army / Navy / Air Force Officers who made a mark at Chairman / MD of public sector undertakings and other large organizations addressing the gathering.

I claim to have succeeded in my transition to the civil on my retirement from the Army after 30 years of service. What helped me was the following credentials –

A degree in engineering , my exposure to the discipline of management through various courses in premier Army institutions , a MBA from the Indore University obtained while in Army Service , my 3 year tenure as an Assistant Military Secretary at  the Personnel Branch at the Army HQ dealing with career planning and placement of senior officers in command appointments and my tenures as Managing Director  of an Army Base Repair facility manned mainly civilians who are governed by the factories act , followed by my tenure as Dean at the MCEME .

I had a successful civil career spanning 10 years with the IT Industry , working with a global IT Company  as Head of Operations and later as Corporate Head for Knowledge and Learning for their Indian Arm. I also worked for another 10 years as the Executive Director of HYSEA – Hyderabad Software Enterprises Association [www.hysea.in] , the only state level association in India for IT Companies .

I am not an exception – there are many more such profiles in the Armed Forces – with Army , Navy and the Air Force looking for a suitable break with the Industry . A few years back , the Indian Institutes of Management came out with a 6 months training program especially packaged for the officers of the Armed Forces . This was a welcome step but I remember many of those who qualified in those program , reaching out to me at Hyderabad for referring them to someone known to me. Therefore , there is a dire need to institutionalize this transition and I am sure the corporate world will benefit immensely from the well honed skills of the Military Veterans and at the same time fulfill a societal obligation they have to the nation. I sincerely hope the noble example I quoted in the beginning from the US will motivate the Indian Industry to take note and come forward to address this issue .